Winding Down at Lens Factory 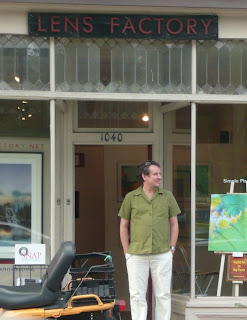 This will be the final weekend for my exhibit at the Lens Factory. Located in the heart of the Queen Street West gallery district it was a new experience. If you don’t learn something from each exhibit than it has certainly been a waste … this gig was full of lessons … some not very profound.

The hanging was interrupted by a Labour Day Parade. Me and my art on the south side of Queen Street and the gallery on the north side. It took about an hour to cross a 40ft road and by then the parade was over anyway. Lesson #1 … maybe when life puts up barriers look for a bar instead of a solution … things might just work themselves out … especially parades.

Opening reception was under the shadow of Toronto’s TIFF (Toronto International Film Festival) and a broken toilet at the gallery. Turns out some of my friends were involved with the TIFF and still others blocked by the Queen Street Galas downtown that seemed in conflict with the streetcars. Some showed but the day was saved by the Queen Street gallery folks. A constant stream of viewers for two hours. Most of those invited turned up over the course of the month so overall it was a good show. Lesson #2 … location plays a huge role when it comes to off-the-street traffic. Wine and beer also help

Many thanks to gallery owner Leonard V. for his lay back help.
Posted by Ray Ferris at 2:48 PM

Ray Ferris
As a scientist, mathematician, computer technologist, I attempt to express nature and sometimes pure math concepts in art. My palate is mathematics, my canvas a computer screen. Works are created as a series of formulas, filters and transformations always with an eye to my current inspiration and basic elements of color and composition. The final rendering is done on a high speed computer, the printing on state-of-the-art wide bed printers. Subject matter can be a flower, an ice crystal or just last night’s dream. I believe the image I seek already exists and it is my task as an artist to find it and share it. People are attracted to the colors, playfulness, and the sense of motion in my art.